We caught up with Engineer Surveyor of the Year, Mike Ford to find out about more about him and his role with Allianz Engineering, Construction & Power.

How long have you worked at Allianz?

I have been at Allianz since 2013, the time has flown by.

How did you get into Engineering?

I’ve been interested in Engineering since a young age and that hasn’t changed to this day. I was fortunate to have attended a technology college that was very supportive of STEM subjects such as maths, science and engineering, which were all subjects that I enjoyed. Having grown up in an Army family my career path was fairly laid out, so I joined the Corps of Royal Engineers working on heavy construction plant. Working on these vehicles created the foundations for the career I have today.

As an Engineer Surveyor no two days are the same. One day I could be in lift shafts and then the next descending the side of a building in a maintenance unit. You definitely need a head for heights in my role.

Are there any ‘stand out’ buildings that you’ve inspected?

Not long after I started, I was already working on wide range of venues such as a London art gallery and UK safari park. I also met comedian John Bishop at his agents office after just finishing the lift examination...I was pleased to say that there were no issues after John entered the lift, I didn’t fancy being on the receiving end of his jokes! I currently examine equipment for some of the world’s best known names in technology.

How does it feel to be awarded with this accolade?

I was honoured just to be nominated but to receive the award is fantastic. Its a great achievement to be recognised as we are lone workers and seldom see another colleague on a daily basis unless we have arranged to work together.

Where do you see your career going?

I’m currently studying an integrated masters as I am always looking to further my knowledge in various aspects of engineering. I would like to move into operations or technical standards if the opportunity arose.

What piece of advice would you give to somebody wanting to work in engineering?

Use all of your senses. If it looks wrong, sounds wrong and your gut instinct feels wrong, then it probably is wrong. Have the ability to adapt - Engineering is constantly evolving and to keep current we must evolve. 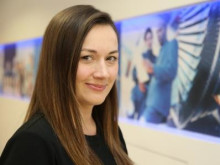