Allianz’s award-winning Scholarship Programme, which actively supports brokers to achieve their CII Diploma in Insurance in 18 months, celebrated the graduation of its first intake of personal lines scholars with a special event hosted by Allianz Retail general manager, Neil Brettell.

One scholar, Sam Spare of P F Spare Insurance Brokers, had extra reason to celebrate as, in addition to securing a distinction in each examination undertaken, he has been awarded the prestigious CII Catlin Award for Excellence in Claims Practice. The national prize, awarded annually, is given to the candidate who is judged to have passed with the greatest merit.

Spare commented: “The award came as quite a surprise; I’m very pleased to have received such recognition. I must express my thanks to Allianz for the invaluable support I’ve received over the past eighteen months.”

He added “I wouldn’t hesitate to recommend the scholarship. Every module enhanced my skills and the group environment promoted networking opportunities with other scholars and people within Allianz. If you are genuinely committed to your own development the programme is incredibly rewarding.”

Since 2012, more than 120 brokers have been enrolled in the Allianz scholarship programme, benefitting from first-class tuition and networking opportunities including an exclusive alumni membership group. At the most recent event 110 participants gathered to share professional advice and experience.

Allianz Retail general manager, Neil Brettell said: “The scholarship programme continues to be extremely successful and we remain committed to investing in the personal development of brokers and raising professional standards across the industry. Thank you to all of the scholars’ sponsors for their support during the programme and congratulations to all of our recent graduates; we look forward to continuing our relationship with you through the alumni membership group.”

1) The scholarship programme now in its fourth year, builds on the success of the Allianz Partners Academy, a long-running training programme which welcomes more than 700 brokers to technical training and breakfast club events each year.

Around 85 million private and corporate customers rely on Allianz's knowledge, global reach, capital strength and solidity to help them make the most of financial opportunities and to avoid and safeguard themselves against risks. In 2014, over 147,000 employees in more than 70 countries achieved total revenues of approximately 122.3bn euros.property and casualty insurer worldwide.

Allianz’s award-winning Scholarship Programme, which actively supports brokers to achieve their CII Diploma in Insurance in 18 months, is open for Commercial and Personal Lines applications. Now in its fourth year, Allianz will recruit 50 new Scholars to join the programme and begin their studies in May.

Allianz welcomed 51 new brokers to its Academy Scholarship Programme this week, at a launch event held at Painters Hall in the City of London. Places on the award-winning programme, which actively supports brokers to achieve their CII Diploma in Insurance in 18 months, were allocated to 33 commercial brokers and 18 personal lines brokers. 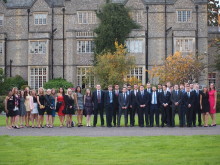 Allianz has welcomed 33 graduates onto its graduate programme. Spread over six schemes the graduates will rotate through the company enabling them to gain valuable skills and extensive exposure to the business.