Almost half of Britain’s DIY enthusiasts have said they will be getting down to some home improvements this Easter weekend but with many people confessing they didn’t know how to do the job, combined with the time it takes to complete their handy work; not to mention the arguments, it makes you wonder why on earth we bother?

One third (33%) of people confessed that they had started a DIY job without knowing how to do it and many turn to YouTube (50%) in the belief that’s where they’ll find the expertise needed to get the job done.

Allianz Insurancecarried out the research and found that the top three DIY jobs Brits say they are happy to take on themselves are internal painting, putting together flat pack furniture and putting up shelves. The snag is that these jobs can take a lot longer to complete than they had anticipated.The survey asked people how much time they had spent on their longest ever DIY task, and found that on average it was two years. One person’s example in the report was fairly typical. They said: “Paving the back garden started nearly two years ago and (it’s) still not done, hopefully (it will be) done by this summer”.

For nearly one in five people (18%) a DIY task simply defeated them and in the end they had to get someone else in to finish the job.

It also seems DIY tests close relationships with just under a third of people saying they had argued with their partner over home improvements. Arguments could also be sparked by the fact that over half of people (51%) said they have unfinished DIY jobs around the house and 35% of women wished their partner would do more DIY.

David Watkins, Allianz’s head of property claims, commented: “DIY enthusiasts should always make sure that they have the correct tools, safety equipment and the knowledge they need to safely complete improvements to their homes. We strongly recommend if you’re not confident to complete the task yourself, call in a professional.”

David added: “We encourage people to take good care of their homes but it is important they know what they are doing as mistakes can be very costly.”

1. Allianz Insurance is one of the largest general insurers in the UK and part of the Allianz SE Group, the largest property and casualty insurer worldwide. Around 83 million private and corporate customers rely on Allianz's knowledge, global reach, capital strength and solidity to help them make the most of financial opportunities and to avoid and safeguard themselves against risks.

2. This press release is for intermediary use only. 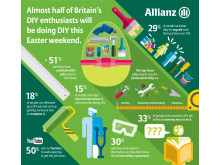